Did women receive antenatal care during the 17th century? And if so, were men involved? These are questions I have been asked by people who have read my recent novel, The Cavalier Historian. It is a fascinating topic, and one which may cause you a few surprises!

Before the 17th century pregnancy and childbirth were the exclusive domain of women with male doctors only occasionally being called in to help with difficult deliveries. During the mid-17th century, however, some doctors began to take a more active role in childbirth although this was limited to the process of delivery with no real attempts at gynaecological surgery. It was not until the beginning of the 1700’s (50 years after the setting in my book) that forceps were introduced and, as the use of anything mechanical was seen as unsuitable for women, ‘man midwives’ began to appear. Initially they were called in to help with difficult deliveries, but by 1720 ‘man midwives’ and doctors were beginning to attend normal deliveries.1

Childbirth was a dangerous event during the 16th and 17th centuries and in Britain at that time the chances of a woman dying were about one in forty. In some countries, such as France, it was even higher. But, as Benjamin Roberts explains in his book Through the Keyhole: Dutch Child-rearing Practices in the 17th and 18th century, that does not mean that there was no antenatal care. As you would expect, there was a great difference in the experience of women depending on such factors as wealth and poverty, rural or urban residence, and the family being ‘enlightened’ or ‘unenlightened’. Care in pregnancy had certainly been a focus for some doctors in Germany as early as the period of the Reformation where male doctors were publishing books on the subject well before the civil war broke out in England. In 1513, for example, the German physician Eucharius Rosselin first published Rosengarten (The Rose Garden), which became the standard text for the more educated midwives who were able to read. Rosselin worked for Katherine, the wife of Henry IV, Duke of Brunswick-Luneburg, who wanted him to supervise the midwives in the city of Worms. His work led him to the conclusion that the high mortality rate in childbirth was due in no small part to careless and substandard work by midwives; his book was written to counter this. Rosengarten was an over-night success, and not just in Germany – by the mid-16th century it had been translated into all the major European languages with the English translation, The Birth of Mankind’ being published in 1540.

In addition to Rosselin the Lutheran preacher Johannes Coler was also publishing about pregnancy and childbirth. His work, Haussbuch, was published in six parts between 1591 and 1605. For Coler, the focus was on providing useful guidance for both mothers and fathers during pregnancy whilst Rosselin was more concerned with the final stages of pregnancy as well as with childbirth itself. Both authors offered advice on good diet for the pregnant woman. 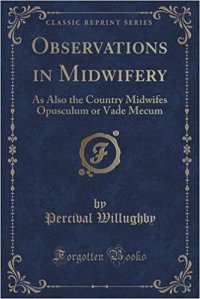 For me, the most interesting book by an English author is ‘Observations in Midwifery’ by Percival Willughby, a doctor who wanted to improve the standards of midwifery and so save lives. In his book Willughby records the details of almost two hundred births he attended and where he criticises the ignorance and superstitious practices of many midwives (including placing the placenta on the baby’s head to prevent sore eyes). Willughby also describes situations where the death of a child, and maybe the mother as well, was as a direct result of the ignorance of the midwife. The first birth that Willughby wrote about could have resulted in such a disaster without his intervention. The incident took place in 1630 when he was asked by a country gentleman in Derbyshire to visit his wife. The local midwife apparently believed that the woman was already in labour and was trying to force the birth of the child. Willughby found that the woman’s waters had not yet broken so he gave her a calming drink (milk, camomile, sugar and egg yolk) to help her sleep. The pregnancy continued without further upset and the baby was born a month later.

Dr Willughby was definitely ahead of his time in the care of women during pregnancy, and also in improved care during childbirth. For some unknown reason ‘Observations in Midwifery’ was not published until after Willughby’s death when a number of hand-written copies were made, but the book was not actually published until 1863. There are two known hand-written copies still in existence, one of which is held by the Royal Society of Medicine, London.

Willughby was not unique amongst English doctors of that time for in his book he records a conversation which he had in 1642 with a Dr Harvey, a conversation in which they shared information about pregnancy and childbirth. So, to answer those questions about The Cavalier Historian: it was not the norm for women to receive antenatal care during pregnancy at the time of the English Civil War, but for a noble woman it would not have been unheard of. I like to imagine that the doctor in my book may have come into contact with Willughby or with the books of Rosselin and Coler, and that these had informed his care of a pregnant woman; and he would most certainly have been called in to assist with a difficult delivery when things went wrong.

In conclusion, pregnancy and childbirth were dangerous times for a woman in the 17th century. Ignorance and superstition were rife amongst the poor uneducated midwives, but if one were wealthy enough and of a high enough social standing it might have been possible to receive more enlightened antenatal care. Those women were the lucky ones.

References:  1 Royal College of Obstetricians and Gynaecologists;    Through the Keyhole: Dutch Child-rearing Practices in the 17th and 18th century by Benjamin Roberts

Observations in Midwifery by Percival Willughby

4 thoughts on “Call the midwife?- pregnacy and childbirth in the 17th century”