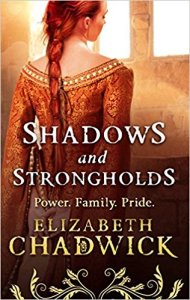 An awkward misfit, nine-year-old Fulke FitzWarin leaves his family for the household of Joscelin de Dinan, Lord of Ludlow. Once there, he begins to learn the knightly arts which he desperately hopes will free him from the shadows of his past.

Joscelin’s youngest daughter, Hawise, befriends Fulke when he most needs it. But as the years pass, an enemy to Ludlow changes their friendship unalterably, forcing them onto opposite sides of a cruel divide.

When the menace to Ludlow intensifies, Fulke must confront the future head on or fail on all counts, all the while desperate to know if Hawise stands with or against him.

Shadows and Strongholds is the early part of the story of a family who appear in Ms Chadwick’s novel Lords of The White Castle, which is itself based on the history of the FitzWarin family as it was told in a rhyming story written in the thirteenth century – the sort of story told to pass long winter evenings in the great hall. After completing that book the author felt compelled to tell the story of the early life of the key characters, and I am glad that she did! This is a tale steeped in the tensions and conflicts of a time which may not be well known to many readers but which is a fascinating period of English history, telling the story of the lords of Ludlow and Whittington against the broader backdrop of a country riven by civil war. The competing claims for lordship of Ludlow and Whittington castles are well documented, as is the outcome (no spoiler here!), but what is compelling for the reader is the fact that many of the key players in this novel are unknown to us so we don’t know how they will be affected by events, creating an exciting plot line which draws you in.

The original writer of the medieval tale is known to have been free with chronological order and some facts, Ms Chadwick has often followed his lead as this creates a great story line, and as Shadows and Strongholds is a work of historical fiction most readers will be happy with that. After all, this is not an academic historical account of the times but, instead, the author immerses the reader in the sights and sounds of a bygone age, the structure of a society which is unfamiliar to us, the violent conflicts between barons and those in authority which would be impossible in England today but which moulded and influenced the political scene in a much more turbulent time.

Those who are already familiar with Ms Chadwick’s work will recognise her style in this novel – a well written character driven story based on detailed research. The characters are well rounded, with the young Marion in particular drawing a sympathetic response despite her actions (which stem from a traumatic event in her childhood). In the modern world Marion would have been given psychiatric counselling and would most likely have turned out very differently, but understanding of mental problems in the twelfth century was limited, and Ms Chadwick has used this to develop a character whose interactions with those around her are pivotal to the plot. As well as Marion and the other characters about whom we know little but their names there are also brief appearances in Shadows and Strongholds by key players in history, such as Henry II, and the interplay of these characters is what makes for an exciting story. Added to this is a strong evocation of period through the careful use of language with the novel written in an easy to read style yet utilising a number of medieval words for clothing and objects which we no longer have, further infusing the reader with a sense of time and place.

Shadows and Strongholds will appeal to both fans of Ms Chadwick and those new to her work. If you enjoy good historical fiction, politics and battles, family life and romance, good strong plot-lines, well rounded characters and authentic dialogue then this book is for you. I enjoyed it, and Lords ofThe White Castle is now on my list of books to read.

Shadows and Strongholds can be found on Amazon

You can find out more about Elizabeth Chadwick here