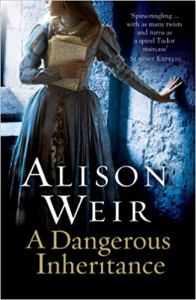 Two women separated by time are linked by the most famous murder mystery in history, the Princes in the Tower.

Lady Katherine Grey has already suffered more than her fair share of tragedy. Newly pregnant, she has incurred the wrath of her formidable cousin, Queen Elizabeth I, who sees her as a rival to her insecure throne.

Alone in her chamber in the Tower, she finds old papers belonging to a kinswoman of hers, Kate Plantagenet, who forty years previously had embarked on a dangerous quest to find what really happened to her cousins, the two young Princes who had last been seen as captives in the Tower.

The use of dual timelines has become a common plot device in the last few years, but what makes A Dangerous Inheritance different is that rather than having one timeline in the present and the other in the past both of the main characters in this novel are historical figures from the fifteenth and sixteenth centuries. Katherine Plantagenet was the daughter of Richard III, Katherine Grey was the granddaughter of Henry VII, and what is interesting about them is that they are each descended from one of the two men who could have been responsible for the deaths of the sons of Edward IV, the infamous ‘Princes in the Tower ‘. In this novel both young women are trying to find out the truth about the disappearance of the princes, and about the role which might have been played by their family members.

As a respected historian Ms Weir has used countless primary sources to weave together the lives of these two young women who found that having royal blood can be more of a curse than a blessing as they each posed a threat to the Tudor monarchs who needed to secure the succession. It would be easy to criticise both Katherines for bringing some of the problems on themselves through their own actions, but the reader should not forget that these were teenage girls who fell in love and suffered for it. As we follow their stories we find ourselves immersed in the life of the royal courts which are brought vividly to life by Ms Weir, every aspect is conveyed in rich detail from fashion to food, accommodation to customs, and much more besides.

If the stories of these two young women are not interesting enough in themselves the author uses their imagined access to both primary and secondary sources written within 100 years of the deaths of the princes to weave together a compelling murder mystery. What did happen to the sons of Edward IV? Did they die of natural causes? Were they murdered? Where were their bodies? Were they killed on the orders of Richard III or Henry VII? Or did they survive to pose a threat to the Tudor monarchy? Ms Weir again uses her commanding knowledge of the period to present both sides of an argument which has intrigued people for more than 500 years, and whilst the protagonists in this novel come to their own conclusion history itself still cannot prove one way or another what happened to the unfortunate princes.

If you are fond of novels set in the Tudor period or enjoy a good ‘whodunnit’ then I think you will enjoy A Dangerous Inheritance.

A Dangerous Inheritance can be found on Amazon

You can find out more about Alison Weir here