375 years ago saw the start of the last civil war to be fought on British soil when King Charles I raised his royal standard in Nottingham on 22nd August 1642. But what had led a ruling monarch to declare war on his own people?

Charles I was a complex man who, like most people, had his good and bad points. He was a principled and conscientious ruler, believing he had been divinely appointed by God and therefore had a duty to rule for the good of the people. Yet he was also reserved, stubborn and politically unskilled. Charles believed that everyone was subject to his will, all his actions were for the good of the people and he could do no wrong as God’s chosen king. Such a belief made the need for deft political intrigue totally irrelevant in his eyes.

Charles had been crowned king in 1626, and it was not long before many of his subjects began to feel uneasy about his religious beliefs and policies. England had been a Protestant country since the time of Elizabeth I, and many of the more zealous Puritan Christians were afraid that the King planned to overthrow their faith and restore Catholicism as the state religion.

In 1633 King Charles sent Thomas Wentworth to Ireland as his Lord Deputy to ‘civilise’ the Irish and force them to conform to the Church of England. The titles of Irish landowners were challenged and many old plantations taken over or new ones set up with English landowners in charge. Charles had hoped that this would isolate the Catholics, but what he didn’t foresee was that the Protestant ruling elite would feel alienated too. Similar problems arose in Scotland when Charles tried to ‘manipulate’ land titles there, and things finally came to a head when he tried to introduce a version of the English Book of Common Prayer into that country, provoking riots and leading to the drawing up of a National Covenant to demand immediate withdrawal of the offending book. The Covenant was a hard-hitting tract against the authoritarian rule of Charles and tacitly implying that revolt against him would be justified.

King Charles believed that the Scots had no right to oppose him and tried to crush them by force, with disastrous results. The ‘Covenanters’ overwhelmed the poorly trained English army which had been sent against them, and the king was forced to sign a peace treaty at Berwick. Charles was even more desperate to crush the opposition after this humiliation and so he summoned the English Parliament in October 1640 to ask for more funds. Unfortunately for him, Parliament took the opportunity to complain about his policies and refused to grant him funds until he had dealt with their complex grievances, some of which dated back to the beginning of his reign. Charles was furious and dissolved Parliament. The Scottish Covenanters invaded northern England again and, lacking funds, it was another poorly trained and poorly-equipped army which Charles sent north. Unsurprisingly, it was soundly beaten once again.

The embattled and embittered king was forced to recall Parliament, once again leaving himself open to attack by the politicians who opposed him. The Catholic Irish and Scottish Covenanters also took the opportunity to work together and put pressure on Parliament to impeach Wentworth (who had been created Earl of Strafford by the King) because of the trouble he had caused in Ireland. The leader of Parliament, Pym, helped to organised the opposition to Stafford who was tried, found guilty, and executed.

If problems in England weren’t bad enough for Charles, the Catholic Irish decided to take advantage of the situation and rebelled against their Protestant English rulers in 1641. Many Protestant English and Puritan Scottish settlers were killed and panic began to spread in England yet, rather than unifying people, it only emphasised their religious differences and the two camps – Puritan and Royalist – became even more sharply divided. Charles and Parliament argued about who should be put in charge of the army which was to be sent to crush the Irish rebels. Parliament would not agree with the king until he had addressed their grievances but Charles, believing in his divine right to rule, would not allow them to bully him and decided to raise an army himself. He believed that the Members of Parliament had tried to humiliate him once too often and needed to be put in their place; on the other hand, Parliament believed that the King would never accept their input into his rule which, in their eyes, made him a tyrant. Both sides were entrenched and there was no going back. England was irrevocably divided and embarked on the final descent into civil war.

If you had lived in the 17th century would you have backed King Charles I or Oliver Cromwell during the Civil War? For a bit of fun why not answer these questions and find out?

What is your view of politics?

A An elite should govern us

B Every-one should have an equal say in government 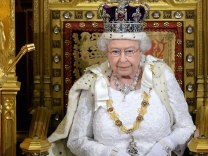 What is your view of the monarchy?

A The Queen should have much more power to set laws

B The Queen should be a figurehead only

What is your view of religion?

B People should be free to worship in an informal way

Mostly A’s – You would have been a Royalist. You would have said that the King is a divine ruler appointed by God. He should be able to rule without Parliament, choosing what laws and taxes he wishes to impose without interference from a Parliament which represents the people. You would also have said that the King is the Head of the Church of England which should be the state religion; form and structure is required to worship God, informality shows a lack of respect.

Of course, it was not quite that simple! Although Parliamentarians wanted the people to have more of a say in government it was only a limited number of people from certain classes in society who had that right. There was no universal suffrage – no votes for women or for men who did not belong to the right social class. As for religion, it went without saying that you would have been a Christian. Also, both Parliamentarians and Royalists felt the need to impose their form of worship on everyone whereas people today would say that there should be much more freedom to choose, and acceptance of those who choose to worship differently or not at all.

So, now you know which side you would have been on why not read ‘The Cavalier Historian’ and see what might have happened to you if you had lived through the English Civil War!