We have all seen pictures of barrage balloons floating high over London during the Blitz. But did you know that these balloons were the inspiration for a simple yet effective weapon used by the British against the German mainland? 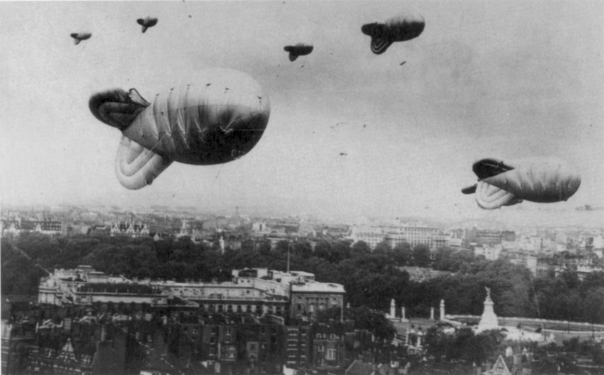 At the outbreak of war there had been complaints about the damage caused to electrical power cables by the tethers of barrage balloons which had broken free from their moorings. As a result it was suggested that Britain should launch balloons from France to try to cause similar damage in Germany. The idea was not pursued at the time, then the airfields in France fell into enemy hands and the plan was shelved. If not for a gale on 17th -18th September 1940 it is likely that nothing further would have been done, but on that night a number of barrage balloons in England broke free and were blown across the North Sea. The rogue balloons caused damage to power-lines in Sweden, Denmark and Finland. On hearing this, Churchill gave the go-ahead for a study on using similar balloons as weapons against Germany; as he said, the loss of the barrage balloons had been a bit of a disaster but ‘we may make a virtue of our misfortune’.

‘Operation Outward’ was given the go-ahead to use free-flying hydrogen balloons which were cheap and simple to make. There were two types of these ‘balloon weapons’. The first trailed steel wires behind them to catch in high voltage power lines and damage them by creating a short circuit. Others carried incendiary devices which were intended to start fires in the countryside. Just before the balloons were released a fuse was lit which would burn through a cord holding the trailing wire in place, causing it to drop free over the target zone. For the incendiary devices, the fuse burnt through restraints to allow the ‘bombs’ to fall in the target area – Germany’s vast pine forests and heathland. Some of the devices contained phosphorus in bottles – when the bottle smashed on landing the contents spontaneously caught fire. Others (known as ‘socks’ because their design looked like a pair of  socks tied together) were intended to catch in the branches of trees where they would burn for 15 minutes, hopefully starting a forest fire. The plan was that, as well as causing physical damage, the balloons would mean large numbers of people would have to keep watch for fires instead of doing more productive work, thus disrupting the enemy’s war effort even further. It wasn’t long before the Germans were also sending up fighter planes to try to shoot down the balloons, again tying up resources which could have be more profitably used elsewhere.

In August 1942 as many as 1,000 balloons were launched every day, sometimes up to 1,800 went up in just 3 or 4 hours. The only thing that halted the flights was if a bombing raid was going out to Germany – there was always a danger that the balloons could bring down allied aircraft. Over 99,000 balloons were launched during Operation Outward, flying at around 16,000 feet and using simple systems of venting gas or dropping ballast to stay at the right height. Such simple balloons cost just 35/- each (35 shillings, or the equivalent today of about £85). It is impossible to know quite how much damage was caused, but it was certainly far more costly to Germany than the expense to Britain in producing them. The latex rubber needed for balloons was in short supply in an England struggling to bring in shipments of supplies through seas where German U-boats roamed, but luck was on the side of the British as the navy had over 100,000 weather balloons in storage, and these were perfect for the job. The first balloons were launched on 20th March 1942 from Felixstowe Ferry Golf Club in Suffolk. In July 1942, a second launch site was set up at Oldstairs Bay near Dover, then a third at Waxham in Norwich. Balloons continued to be launched until September 1944 when supplies of hydrogen were needed for the beachhead in Normandy, and there were also worries that too many balloons might interfere with Allied planes as they followed up the retreating German army.

After the war German records showed just how much disruption had been caused to the electrical network by Operation Outward. The Germans said that around £1,500,000 of damage was caused (approximately £49 million in today’s money) although the actual damage was really much higher as many of the war-time records were incomplete. One of the major successes of the attacks was on 12th July 1942 when a balloon trailing a wire struck an 110,000 volt power line near Leipzig causing a fire that totally destroyed the power station at Bohlen.

So, next time you see a simple balloon at a birthday party or other celebration, just remember that they have not always been quite as peaceful as they seem!