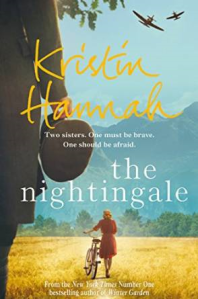 ‘The Nightingale’ is a novel which will grip you from start to finish with its portrayal of life for two sisters in France during the Second World War. Vianne’s husband is taken by the Germans to a labour camp. Having a daughter makes Vianne cautious, intent on ensuring that they both survive the war. Her sister, Isabelle, is younger, more daring; a girl who has felt unloved for most of her life and feels she needs to do something, anything, to give meaning to her existence. Yet as the years progress, as hunger and lack of all luxuries set in, so the characters change to meet their changing circumstances. Small changes at first, but for each action there is a consequence leading, almost inevitable, to more dangerous actions. This is real life in the sense that it is moral choices that people make which mould them, choices which they sometimes wish they didn’t have to make but which cannot be avoided.

‘The Nightingale’ covers many aspects of life in occupied France – living with German officers who are billeted in your home, whether you like it or not; the treatment of Jews; the harsh realities of Occupation; the French Resistance; escape routes for Allied pilots across the mountains into Spain. Unusually, this novel’s two central characters are women, giving us a deeper understanding of what life was like away from the battlefields of the war, and helps us to realise that there are more battles to be fought than those involving guns and bombs.

The relationship between the two sisters changes dramatically during the novel as they finally come to realise the strengths and weaknesses which they each have, both different yet both equally brave and selfless in their attempts to help the lost and vulnerable under Nazi occupation.

This novel is well-paced, the plot developments work well, the characters are believable and many faceted, the dialogue realistic. The novel begins in America in 1995 with a French immigrant receiving an invitation to a ceremony in France to honour a heroine of the Second World War. Part of the suspense of the novel is wondering which of the sisters it is to honour, and which is the one who received the invitation. Did they both survive the war?

‘The Nightingale’ is fiction but is based on the lives of real people who put their lives on the line to help others during the German occupation of France. Many of these people made the ultimate sacrifice, but those who did survive rarely spoke of their experiences, sometimes because their memories were just too painful, or maybe because they felt that they had done nothing more than others. In ‘The Nightingale’ Kristin Hannah pays tribute to these people in a story full of pain and fear, yet also humanity and courage. It is a novel which I can heartily recommend to you.

The Nightingale can be found on Amazon

You can find more of my book reviews here

1 thought on “Book review – ‘The Nightingale’ by Kristin Hannah”