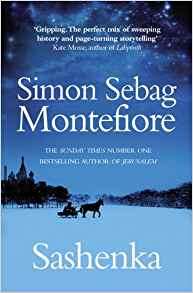 Winter, 1916. In St Petersburg, snow is falling in a country on the brink of revolution. Beautiful and headstrong, Sashenka Zeitlin is just sixteen. As her mother parties with Rasputin and her dissolute friends, Sashenka slips into the frozen night to play her role in a dangerous game of conspiracy and seduction.

Twenty years on, Sashenka has a powerful husband and two children. Around her people are disappearing but her own family is safe. But she’s about to embark on a forbidden love affair which will have devastating consequences.

Sashenka’s story lies hidden for half a century, until a young historian goes deep into Stalin’s private archives and uncovers a heart-breaking story of passion and betrayal, savage cruelty and unexpected heroism – and one woman forced to make an unbearable choice …

Sashenka is a classic historical fiction novel focusing on the lives of a family across generations. Encompassing the story of Russia through the 20th century Mr Montefiore has woven a fascinating tale of the rise and fall of Soviet Russia and its impact on Sashenka, the daughter of a wealthy family, who embraces the message of equality within the communist doctrine. As with all good books in this genre a number of historical figures are featured, and it is their interaction with fictional characters which is so appealing – you can know the history of Russia, but the way it impacts on this fictional family is new to you and, as such, draws you in.

As always, Mr Motefiore has conducted detailed research into the period he is writing about. The description of St Petersburg under the last of the Tsars gives an insight into two very different Russias – high society with its materialism and decadence, coupled with the secret police and their attempts to destroy the fledgling communist party set against the extreme poverty of millions of women and children whose men are sent to fight in the First World War. The novel then leaps forward to the Soviet period under Stalin and focuses on the fear and insecurity of people like Sashenka, people who have been loyal communists from the very beginning yet are just as likely to suffer under Stalin’s mercurial rule. The final section is moving in the way it portrays life after communism, the search of people who lived through difficult times for those they loved and lost, most not expecting any kind of reunion but just wanting to know what happened to their families.

The author of Sashenka has created believable characters who can be idealistic yet brutal, worldly yet naïve, and who it is easy to sympathise with. This is not a comfortable novel to read, at times it can be quite brutal, but to omit such sections would give a false picture of those times in Russia and do a great disservice to the real people on whose lives these fictional characters are based. The style of Mr Montefiore’s writing is clear and precise at times but can then switch to a description of deep love and passion, whether between a man and woman or a woman for her children, and as such the book has a great emotional impact.

Sashenka is a novel full of plot twists and turns, it is well-paced and vivid, complex and passionate, and incredible evocative of time and place with its accurate historical backgound; in all a gripping read which I would recommend to anyone with a love of historical fiction or of Russia.

Sashenka can be found on Amazon

You can find out more about Simon Sebag Montefiore here