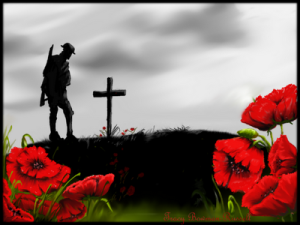 At 11am on 11th November we remember the ending of the First World War, and the men and women who lost their lives in other wars and other parts of the world. Much of our focus is often on Europe, and those who fought and died in other theatres of war can sometimes be forgotten or relegated to the sidelines. One such group are the men who fought and died in North Africa during the Second World War.

Mersa Matruh is an ancient fishing port dating back to the time of Alexander the Great. It was also the place where Anthony and Cleopatra would escape for seclusion – at the time it was a village of sponge fishermen where the two lovers would relax and swim naked together in the sea. Allied troops were stationed in Mersa Matruh during the First World War, and at the time of the Second World War it was at the end of a narrow-gauge railway from Alexandria and as such was an important supply post for the Allies. The Allied troops who fought in North Africa came from all around the world – from the United Kingdom to Australia, from India to New Zealand, and the British Eighth Army (including the famed Desert Rats) set out on some of their most important operations from Mersa Matruh. Mersa was also the site of a crushing Allied defeat by Rommel’s Afrika Corps in June 1942.

I would like to thank Ian from the Desert Rats website for allowing me to use the following poem as a tribute to all those who fought and died during the North African campaigns of World War 2.

THE GRAVES AT MERSA MATRUH.

How often do you folks at home
Think of sandy graves without a stone,
Where sleep our comrades brave and true,
Out in the desert at Mersa Matruh.

The raging sandstorms awake them not,
They’re cool below but above is hot
The trails of the desert are over them,
They fought and died like Englishmen.

Do you not feel pride in your heart
Where you think may be a friend took part
in the struggles for the empire, Britain and you,
And lay down their lives at Mersa Matruh.

On honoured scroll their names shall shine,
And will not dim through pass of time
In years to come we will remember them
As soldiers of the empire and British men.

Then forget them not you folks at home,
Those men who lie in the desert alone,
They died for their country, Britain and you
In the western desert of Mersa Matruh.

9 thoughts on “THE GRAVES AT MERSA MATRUH.”