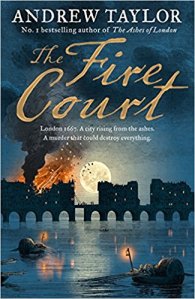 Somewhere in the soot-stained ruins of Restoration London, a killer has gone to ground…

The Great Fire has ravaged London, wreaking destruction and devastation wherever its flames spread. Now, guided by the incorruptible Fire Court, the city is slowly rebuilding, but times are volatile and danger is only ever a heartbeat away.

James Marwood, son of a traitor, is thrust into this treacherous environment when his ailing father claims to have stumbled upon a murdered woman – in the very place where the Fire Court sits. Then his father is run down and killed. Accident? Or another murder…?

Determined to uncover the truth, Marwood turns to the one person he can trust – Cat Lovett, the daughter of a despised regicide. Marwood has helped her in the past. Now it’s her turn to help him. But then comes a third death… and Marwood and Cat are forced to confront a vicious and increasingly desperate killer whose actions threaten the future of the city itself.

The Fire Court is an engaging ‘who dunnit’ set in the aftermath of the Great Fire of London. The fire which ravaged London in 1666 is well known, as are some of the buildings designed by Sir Christopher Wren to help with the rebuilding; yet how many of us have ever taken the time to think about the aftermath of the disaster? How was it decided who owned which patches of rubble? Who would be responsible for re-building? And, above all, where would the money come from to re-build? I must admit that I have given little thought to that in the past and am grateful to Mr Taylor for introducing me to the Fire Court.

Set up by the king to untangle the complicated ownership/leases/sub-leases etc. the Fire Court was made up of a number of judges who gave their time for free to find the most equitable way to get the re-building underway as quickly as possible. Surprisingly for the 17th century there was very little corruption and the work went ahead swiftly. It is against this backdrop that the story of The Fire Court takes place.

The author has conducted an unprecedented amount of research into the Fire Court itself and 17th century London in general which immerses the reader in a city full of the rubble and ash of the fire, the dirt and smells of the Restoration, the filthy streets, the bridges and the river, the clothing and food which were a part of everyday life. He also shines light on the position of women in a society which still saw them as chattels yet where some women were already attempting to achieve a more independent role. In this realistic world we are introduced to James Marwood as he becomes embroiled in a legal battle for ownership of and therefore permission to re-build the Dragon Yard, a battle which leads to murder and through which we follow Marwood and Cat Lovett on a search for truth and their own survival. This is a well-crafted murder-mystery novel with twists and turns which keep the reader guessing to the very end, and well worth a read on so many levels.

(I was given this novel as a gift and was part-way through before realising that it is the sequel to Andrew Taylor’s novel The Ashes of London but it is a novel which stands well on its own.)

The Fire Court can be found on Amazon

You can find out more about Andrew Taylor here