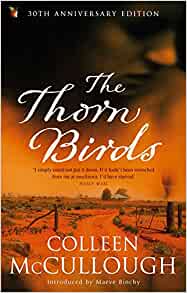 Sometimes when he didn’t know he was being watched Meggie would look at him and try desperately to imprint his face upon her brain’s core . . . And he would turn to find her watching him, a look in his eyes of haunted grief, a doomed look. She understood the implicit message, or thought she did; he must go, back to the Church and his duties. Never again with the same spirit, perhaps, but more able to serve. For only those who have slipped and fallen know the vicissitudes of the way . . .

A classic historical family saga taking the Cleary family from 1915 New Zealand to 1969 Australia and Europe. In The Thorn Birds Ms McCullough has created a family of incredibly realistic characters who fight the struggles of life on two fronts – the harshness of life in the Australian Outback and personal conflicts which shape the people they become.

Australia with its heat and dust, it’s fires and floods is the panoramic backdrop for an unconventional love story which would lose much of its impact without this realistic depiction of just how harsh life was for people who struggled to live off the land. From the wealthy Clearys to itinerant sheep shearers and cane cutters, and the ubiquitous swagmen, Australia is revealed in all it’s unforgiving nature through sight and sound and scent.

At the heart of The Thorn Birds is the love between Meggie and Ralph, a priest who puts his faith and career in the Church before his love for the woman who is the other half of himself. Ms McCullough has crafted a fascinating plot which juxtaposes the difficulties of living this love with the difficulties of living in the outback. The central characters of this novel are totally human, incredibly flawed yet strong, and I’m sure that all readers will recognise something of themselves in them.

Love hurts. That may seem a trite saying but it is one most people can relate too, and in The Thorn Birds we see the raw emotion and hurt that can be caused by such love. This is a powerful telling of human emotion where duty and desire are the two sides of a coin which can never fully be seen or realised at the same time. One must take precedence over the other, sometimes duty sometimes love, but always the other call is there drawing the characters into situations they find incredibly difficult, even heart-breaking, but which they would never be without.

The Thorn Birds is a well-crafted powerful novel written in descriptive prose and realistic dialogue which cannot fail to move, and as such I highly recommend it.

The Thorn Birds can be found on Amazon

Beneath the light of the candle I am sitting with my hands on my knees, staring in front of me. And I keep turning over in my mind the thought that I am at the end of the earth, in a place which you do not know and which your whole lives through you will never visit.

It is 1640 and Father Sebastian Rodrigues, an idealistic Jesuit priest, sets sail for Japan determined to help the brutally oppressed Christians there. He is also desperate to discover the truth about his former mentor, rumoured to have renounced his faith under torture. Rodrigues cannot believe the stories about a man he so revered, but as his journey takes him deeper into Japan and then into the hands of those who would crush his faith, he finds himself forced to make an impossible choice: whether to abandon his flock or his God.

The recipient of the 1966 Tanizaki Prize, Silence is Shusaku Endo’s most highly acclaimed work and has been called one of the twentieth century’s finest novels. As empathetic as it is powerful, it is an astonishing exploration of faith and suffering and an award-winning classic.

Silence is set in what is known as the ‘Christian century’ in Japan – Christian missionaries first arrived there in 1549 and the faith spread rapidly; the writings of these Portuguese missionaries are the source of much of what we know of Japan at that time. After an initial period where the western visitors – both traders and missionaries – were respected, those in power in Japan were increasingly worried by the influence of the foreign missionaries. This led to a time of persecution in which many Christians were executed and the foreign missionaries were banned, if they came to Japan they were forced to give up their faith or face martyrdom. Many Christians were brutally tortured before being burned, drowned, or slowly bleed to death. Despite this, missionaries from Europe continued to sneak into Japan which is where the novel Silence begins.

The story of Rodrigues, a 17th century Portuguese priest, is a mixture of history and theology told through the interweaving lives of a range of believable characters. Shusaku Endo writes of the conflict between east and west – the relationship between Japan and Christianity – in a way which shows that Christianity must adapt if it is to take root in a culture so very different to its Middle Eastern origins and European development. It is a tale of the struggle between faith and belief, a study of martyrdom versus apostasy written in a restrained style which reflects the time period yet with a simplicity which gets to the heart of the pain and suffering of the Europeans who were often placed in an impossible position.

Endo writes with sensitivity about the clash of cultures creating a novel which is moving and disturbing in equal measure. Although Rodrigues is a fictional character his story is based upon a real person, the Italian priest Giuseppe Chiara, and like Chiara Rodrigues takes a physical and theological journey to his own calvary, struggling with the eternal concept of why God is silent in the face of suffering. Silence gives us no clear answer to that question but leaves us with much to ponder on and apply to our own situation.

Endo has created a novel which paints a vivid picture of life in 17th century Japan whilst at the same time being an excellent study of man and faith, a book which is at times delicate and at other times brutal, a sometimes harrowing picture of the mental and physical challenges faced by the missionary. It is a testament to the translator that the reader can feel deeply the ideas and emotions which the author so clearly wished to convey. If you feel that a story about a missionary in Japan is not for you then you will be missing out on a philosophical novel which challenges many fundamental beliefs and morals and is likely to change the way you think about life.

Silence can be found on Amazon