I’ve always been fascinated by the Second World War. It was ‘recent history’ for me as a child, and the Sunday afternoon movie on TV was often about the conflict which ended just 12 years before I was born. My love of history led to me studying the war at A level, and I again found myself delving into the political, military and personal aspects of conflict which are always so intricately entwined.

More recently, I came across the story of the renowned correspondent, Clare Hollingworth, which led me to reading the book ‘The Women Who Wrote the War’ by Nancy Caldwell Sorel. I was fascinated by the stories of these brave women, and thought that writing a novel from the perspective of a female correspondent would be a really interesting angle. (You can find my previous article on women war correspondents here.)

In No Job for a Woman, the first novel in my new series, Jenny McLeod is a fictional character whose experiences are not too dissimilar to those of the small number of very determined women who went to the frontline to report the Second World War. It wasn’t easy for them. They had to overcome the arrogance and feeling of entitlement shown by their male counterparts like Ernest Hemingway, while battling a great deal of prejudice from the military who didn’t want women on the battle field. The British, in particular, didn’t want women there at all and wouldn’t give accreditation to female journalists until towards the end of the war. I have taken a little artistic license here as my correspondent, Jenny, becomes involved with the Desert Rats at a much earlier date.

Being a reporter becomes her identity for Jenny, it is all she knows how to do, all she feels comfortable doing. After the end of the war, she still feels the need to let the world know what is happening in conflict zones which is why she continues reporting in 1945 and beyond, from the independence struggles of Israel and India, to the Korean War.

But the books in this series are not just a list of battles, they are a family saga spanning decades. And Jenny finds that she must fight harder than a man just to be treated as an equal. With personal as well as military battles to be fought there was really only one choice of title for my new series – The Wars of Jenny McLeod.

Book one, No Job for a Woman, is now available on Amazon.

Sometimes when he didn’t know he was being watched Meggie would look at him and try desperately to imprint his face upon her brain’s core . . . And he would turn to find her watching him, a look in his eyes of haunted grief, a doomed look. She understood the implicit message, or thought she did; he must go, back to the Church and his duties. Never again with the same spirit, perhaps, but more able to serve. For only those who have slipped and fallen know the vicissitudes of the way . . .

A classic historical family saga taking the Cleary family from 1915 New Zealand to 1969 Australia and Europe. In The Thorn Birds Ms McCullough has created a family of incredibly realistic characters who fight the struggles of life on two fronts – the harshness of life in the Australian Outback and personal conflicts which shape the people they become.

Australia with its heat and dust, it’s fires and floods is the panoramic backdrop for an unconventional love story which would lose much of its impact without this realistic depiction of just how harsh life was for people who struggled to live off the land. From the wealthy Clearys to itinerant sheep shearers and cane cutters, and the ubiquitous swagmen, Australia is revealed in all it’s unforgiving nature through sight and sound and scent.

At the heart of The Thorn Birds is the love between Meggie and Ralph, a priest who puts his faith and career in the Church before his love for the woman who is the other half of himself. Ms McCullough has crafted a fascinating plot which juxtaposes the difficulties of living this love with the difficulties of living in the outback. The central characters of this novel are totally human, incredibly flawed yet strong, and I’m sure that all readers will recognise something of themselves in them.

Love hurts. That may seem a trite saying but it is one most people can relate too, and in The Thorn Birds we see the raw emotion and hurt that can be caused by such love. This is a powerful telling of human emotion where duty and desire are the two sides of a coin which can never fully be seen or realised at the same time. One must take precedence over the other, sometimes duty sometimes love, but always the other call is there drawing the characters into situations they find incredibly difficult, even heart-breaking, but which they would never be without.

The Thorn Birds is a well-crafted powerful novel written in descriptive prose and realistic dialogue which cannot fail to move, and as such I highly recommend it.

The Thorn Birds can be found on Amazon 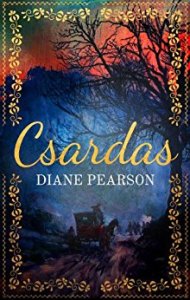 CSARDAS – taken from the name of the Hungarian national dance – follows the fortunes of the enchanting Ferenc sisters from their glittering beginnings in aristocratic Hungary, through the traumas of two World Wars.

From the dazzling elegance of coming-out balls, feudal estates and a culture steeped in romance, to terror and starvation in the concentration camps – no story could be more dramatic than that of Eva and Amalia Ferenc, whose fate it is to be debutantes when the shot which killed Archduke Franz Ferdinand in Sarajevo plunged Europe into the First World War. Their story is enthralling, tragic, romantic – and absolutely unputdownable.

Csardas is incredibly well researched giving a detailed and seemingly faultless history of Hungary from the feudal society which existed in the Austro-Hungarian empire before the First World War through to the creation of the communist state after the Second. With a clever choice of families to follow (aristocrats, wealthy half-Jews and poor serfs) Ms Pearson has been able to look at the key points in the history of Hungary from all perspectives in a narrative which is never ‘instructive’ but flows as a good story should.

The novel is well written giving a real feel of time and place whilst gently encouraging the reader to invest in the lives of its central characters who are believable and multi-layered. You will soon find yourself loving some and feeling less sympathetic towards others – the shallow young girl who never really grows up; the aristocrat whose experiences during World War One leave him mentally scared in a way that guides his future actions; the peasant boy who can’t commit to others because of his fear of loss…

The publisher’s description of this book may give the impression of a romance novel but it is much more than that. There are love stories intertwined throughout, but that is the nature of life itself; where Csardas excels is in the subtle way in which serious topics are covered from the depravities of war to the suppression of the lower classes and horrific treatment of Jews. Essentially this is a book which charts how life and culture in a country changes due to politics and war, giving the reader a fascinating insight into a country which we all know of but know little about.

The beginning of Csardas may seem a little slow to some readers as it sets the scene within Hungary at the beginning of the twentieth century and introduces the key characters, but this is necessary as it gives a great foundation for the engrossing story which follows. This is a book which I have read a number of times and no doubt will return to again in the future.

If you like well-written epic stories based on historical fact then Csardas is for you.

Csardas is available on Amazon

You can find out about other books by Diane Pearson here