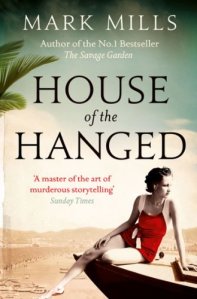 France, 1935: At the poor man’s end of the Riviera sits Le Rayol, a haven for artists, expatriates and refugees. Here, a world away from the rumblings of a continent heading towards war, Tom Nash has rebuilt his life after a turbulent career in the Secret Intelligence Service. His past, though, is less willing to leave him behind. When a midnight intruder tries to kill him, Tom knows it is just a matter of time before another assassination attempt is made. Gathered at Le Rayol for the summer months are all those he holds most dear, including his beloved goddaughter Lucy. Reluctantly, Tom comes to believe that one of them must have betrayed him. If he is to live, Tom must draw his enemy out, but at what cost to himself and the people he loves…?

House of the Hanged is a thriller with the majority of the story set in the mid-1930’s when the threat of war hangs over Europe once more, but no one is sure whether it will be fascist Germany who is the enemy, or communist Russia, or maybe a combination of the two.

The novel begins almost twenty years earlier in revolutionary Russia with the main character, Tom, failing to save the life of the woman he loves. The story swiftly moves on to the years leading up to the outbreak of the Second World War where Tom has given up working for British Intelligence and settled down in the south of France. As the novel progresses we learn more about Tom’s work, how it affected him, and how he is now trying to redeem himself, put the past behind him, and enjoy a life of peace. Each year Tom invites friends to join him at his villa for the summer; he also extends a welcome to refugees, particularly from Russia, as though his efforts to help them may in some way atone for not saving his love. After the thrilling opening the pace of the novel slows as we settle into the relaxed lifestyle of cocktail parties, sailing, swimming etc. in the south of France, but there is already a feeling that this year will not be like those which have gone before. When an attempt is made on Tom’s life the pace quickens again as he begins to question those around him – one of the people he is close to, perhaps someone he loves, has betrayed him.

Mr Mills has created a cast of well-drawn and believable characters in this novel, and the reader will enjoy learning about them and how they could be involved in the attempts to kill Tom. Is the threat to him linked to the current political climate, or has his past in Russia finally caught up with him? (Don’t worry, no spoilers here!) Tom is so unsure of the people around him that he keeps the danger to him a secret; all is calm on the surface, but the author has deftly created an undercurrent of fear and suspense which draws the reader in, helped in no part by his skilled writing, particularly in dialogue. Mr Mills has obviously researched this period of European history and has therefore been able to contrast the relaxed lifestyle of a particular social group on the French Riviera with the tension of a continent edging ever closer to all-out war. He has an evocative style which leaves the reader feeling immersed in a particular place and time – it is almost possible to feel the heat of the Mediterranean sun, the coolness of the water and the everchanging breeze – yet, at the heart, this is a well-paced cat and mouse thriller in which the pace is not slowed by the historical detail.

House of the Hanged is a classic spy story which would make a great holiday read for anyone who likes historical fiction, mysteries and intrigue. I will certainly be trying other books by this author.

House Of The Hanged can be found on Amazon