What would you do if someone told you that there was a witch living in your town or village? Most people in the western world of the 21st century would smile and treat it as a joke at best, and at worst as someone trying to stir up trouble. But things would have been very different in the past.

During the Middle Ages witches were thought to be behind many illnesses from fevered nightmares to sick animals and dying children. This supposed interference in the natural order of things was known as bewitchment and struck at regular intervals, blighting the lives of thousands of people over hundreds of years.

During the period of the 15th to 17th centuries bewitchment reached epidemic proportions with over 40,000 men, women and children in Europe being executed as witches.  It was not only the poor who believed in witchcraft, even well-educated people of the time feared the supernatural and the Vatican sent out a decree warning people against bewitchment.  England was no different to the rest of Europe and many witch finders made it their life’s work to hunt down witches, one actually took 250 people before the courts in just two short years. Witches were greatly feared, and witchcraft was punishable by death.

A well-known example happened at a manor house in the village of Warboys near Cambridge in 1589 when a mysterious illness struck down the five little daughters of the Throckmorton family and seven of their maidservants. The illness bore all the hallmarks of witchcraft, and fear spread throughout the village. The distraught family called in doctors and church leaders to try to diagnose what was wrong (at the time many doctors were willing to accept the idea of witchcraft after all other available explanations for an illness had failed).  The sick victims at Warboys had all the classic symptoms of bewitchment – hellish visions, often of wild animals (one said she saw a cat tearing her flesh off); the bodies of those affected went into violent fits and writhed in agony on their beds.  Once it was decided that witchcraft was the source of the problem someone had to be blamed and, as with most cases at the time, it was an innocent local misfit, Alice Samuel, who was singled out.  Standard practice was to torture a witch, who would often be branded or held under water; witchcraft was so feared that it didn’t matter how much the accused suffered as  any method used to see the curse of bewitchment lifted was deemed totally acceptable.  Many people believed that if you scratched a witch to draw blood it would help to relieve the suffering of the person who had been bewitched and so this was done to Alice on several occasions.  After a year of continuous pressure Alice Samuel finally confessed to being a witch. As punishment, and to keep the village safe in future, she was hanged, along with her husband and daughter.

Another well know incident of witchraft happened in Salem on the east coast of America.  The Salem Witch trials of 1692 played out in a very similar way to the Alice Samuel case, and Arthur Miller later wrote about what happened in his play The Crucible. In December1691 many settlers in Salem had been struck by a horrifying disease, similar in its symptoms to what happened in Warboys and, as in England, it was believed that the Devil was responsible. The town doctor was convinced that what was happening was the result of witchcraft, particularly as eight girls said that they had been bewitched; for the next year the young girls regularly testified in court against other town members. Based on the evidence of the children 152 people were imprisoned on charges of witchcraft, and although none of them confessed 19 men and women were found guilty and executed as witches.

So what was going on? Was there simply a widespread primitive belief in the devil and witchcraft, or was there something else behind these incidents? Professor Linnda Caporael is a Behavioural Psychologist who studied what happened at Salem. Many people believe that the girls had made it all up, but Linnda could think of no reason why they would have done that, or kept up the pretence for so long. The more she studied, the more she began to believe that most of what the girls had experienced had not been faked, particularly when they suffered from severe convulsions. Another factor which made her question accepted belief was that the girls were not the only ones to have experienced visions, many other men, women and  children in the village reported hallucinations to the doctors and clergymen. When Linnda re-read another account it made her think that the symptoms were very similar to those experienced by people who had taken LSD (acid) which is an hallucinogenic drug from the 1960’s. People who have taken LSD say that they experience hallucinations like living nightmares which are very similar to what the victims of witchcraft said in Salem.  This left Linnda with one big question – if the cause of witchcraft was LSD, where had the drug come from?

LSD did not exist in the 15th to 17th centuries, in fact it was not until 1943 that the Swiss neuro-physiologist Albert Hoffman experimented with a natural fungus called ergot whilst looking for medical applications for a drug.  As part of his experiments he made an extract from the ergot fungus, accidentally spilling some of it onto his hand.  Within hours he began to hallucinate. When he finally recovered from the horrific hallucinations he set to work and derived LSD from the extract.

Linnda Caporael began to look at ergot poisoning as a possible explanation for bewitchings.  The descriptions of the effects of the drug on people which she found in medical books matched the symptoms from Salem and she was convinced that she had found an explanation for witchcraft in nature.  The next question, then, was how the settlers had come into contact with the drug? As it was not only the settlers in Salem who were affected by witchcraft but their animals as well (cattle acted strangely and died of no natural causes) Linnda began to wonder if a food common to both humans and animals could be the source, so she began looking at grain.  The dominant crop in Salem was rye, so the question now was to find out how ergot could have got into the rye fields. To help her Linda looked at the work of fungal toxicologist, Professor Maurice Moss.

A fungus contaminates its host and gradually replaces the original seed with its own material so, Linnda surmised, if the rye in the fields was contaminated with ergot then the bread would have been contaminated too. This was important to her theory because the nerve toxins now contained in the bread would account for the hallucinations, pin pricking sensations, the feeling of insects crawling beneath the skin and the powerful fits which meant that the sick people could barely be held down by their friends and family.  Ergotamine (taken from the word ergot) is a drug used in Holland to treat migraines and has been shown to have constrictive powers which can lead to convulsions, and to the blood draining from the skin causing pricking sensations.

Linnda then turned to look at the environment which, again, supported her theory. Ergot thrives in wet, damp soil, and in 1691 the Salem crops had been planted in low marshy ground.  For a mass infection of the harvest to take place it would have needed a warm wet spring and summer; the spring of 1691was stormy and wet and was followed by a wet summer, the crop grown in Salem was rye.  Most of the sickness was on one side of the village where the homes backed onto the western farms with swampy marshlands. Rye was also the staple diet in Europe in the Middle Ages which, if Linnda  Carpoael is correct, could explain the witch persecutions which took place so frequently; particularly as the poor peasant classes were hit most, and rye was their staple diet.

An historian by the name of Professor Mary Matossian has mapped outbreaks of witch trials which were localised in Britain – these were mainly, but not exclusively, in Essex and East Anglia – the surprising result is that the outbreaks coincided with the main rye growing regions.  As the weather conditions at the time were different to today, with wetter and warmer summers, the conditions were ideal for the formation of ergot on rye.

Supporting scientific evidence for this theory about the causes of witchcraft comes from the ‘peat bog man of Grauballe’.  He was buried in a bog in Denmark during the Iron Age and found in 1952.  The man had been murdered with a knife and club then dumped naked into the bog – his throat had been cut from ear to ear and a blow to the right temple had fractured his skull.  Although this sounds brutal this ritual was often carried out if someone was thought to be possessed by demons, the fracturing of the skull would allow the demon to escape and the victim could rest in peace. A post mortem was carried out on the Grauballe man in 1952 and his stomach contents showed that his last meal had largely comprised of ergot.  Chemical tests on a gut sample showed that ergot alkaloids were present, therefore the man would have been hallucination, convulsing, vomiting etc. and would probably have been killed as a witch.

The most recent case of a mass poisoning happened in 1951 when an entire village in France had ergot poisoning caused by infected bread.  In Pont St Esprit (Provence) in August of that year 250 people were struck down, several were taken to hospitals and psychiatric asylums in the weeks which followed.  They were sick, had stomach cramps, couldn’t sleep, suffered from violent convulsions and terrifying hallucinations.  Many had to be strapped down to stop them jumping out of windows to escape their torment.  At least five people died during the outbreak and when ergot poisoning was finally found to be the cause many people did not believe the explanation.  The Bishop of Nimes was called in to exorcise the devil from the bakery which had been the source of the outbreak.  Interestingly, a dog which had been fed on scraps of the rye bread ran in circles and was biting at rocks until it broke its teeth on them and then died.  This was an exact parallel to what happened to the animals in Salem. 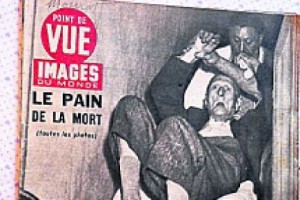 So, was witchcraft really a problem in the past, or were bewitchments caused by ergot poisoning?

I am fascinated by the fact that scientific research is constantly revealing more about our past.  I have come to believe that the misinterpretation of ergot poisoning is responsible for reports of witchcraft over the centuries, and this is what lead me to write the conclusion to the story of Rebekah and Simon in my novel ‘The Cavalier Historian’.