If you holiday in France you may like to visit Arromanches on the Normandy coast. This was the site of one of the Mulberry Harbours, an amazing engineering feat which helped to change the course of the Second World War. The remains of the harbour can still be seen today.

Both the Allies and Hitler knew that an Allied invasion of Nazi held Europe was essential for the winning of the war. They also knew that any landing was unlikely to succeed without a safe harbour in Allied hands. Once the liberating forces had established a foothold on the Normandy coast enormous amounts of men and supplies would need to be landed to re-enforce the bridgehead before pushing on towards Germany. The problem for the Allies was that the Germans had occupied and heavily fortified all the ports on the northern coast of France. The disastrous Allied raid on Dieppe in 1942 showed that taking such ports would only be done with immense loss of life and would not be quick. What the Allies needed was access to a port that was not controlled by the Germans. Small fishing ports would not be suitable as the large ships needed to transport bulky supplies needed a deep port with harbourside cranes; the Allies therefore decided that if no such ports were available they would have to create their own.

The plan they came up with was simple yet would be incredibly complex to achieve – the construction of a new harbour the size of Dover at the site of the invasion. The plan was to prefabricate the elements needed in Britain before towing them across the English Channel and creating a harbour off the landing beaches. The schedule was to complete the construction within two weeks of the D Day landings in June 1944. Winston Churchill knew that there would be enormous problems with this idea but was determined that it should work if the invasion was to be successful. A trial of three competing designs for the floating harbour was set up in 1943 with prototypes built and tested on the Solway Firth. Once the design was finalised the War Office could begin the prefabrication of the concrete caissons.

The invasion of Europe began on 6th June 1944, D Day, with thousands of Allied troops landing along the Normandy coast. Once the beachheads were secured the work on the floating harbours began, the first stage of which was to scuttle a number of old ships off the coast at Arromanches as temporary outer breakwaters (the Gooseberries) to protect the area where the harbour (the Mulberry) was to be built. The huge prefabricated caissons (water-tight concrete structures codenamed Phoenixes) were then sunk to provide the permanent breakwaters which would shelter the floating roadways and jetties.  Once the completed Mulberry Harbour was in place the Allies could begin unloading the supplies which would be so vital for their victory.

There were actually two Mulberry Harbours towed across the English Channel to support the Normandy beachheads. Mulberry A was constructed at Omaha Beach whilst Mulberry B (nicknamed ‘Port Winston’), was constructed off Gold Beach at the town of Arromanches. Once assembled the harbours could unload 7,000 tons of supplies a day. Each incredibly complex harbour had masses of pontoons which supported around 6 miles of flexible roadways ending in huge pier heads supported by underwater ‘legs’. 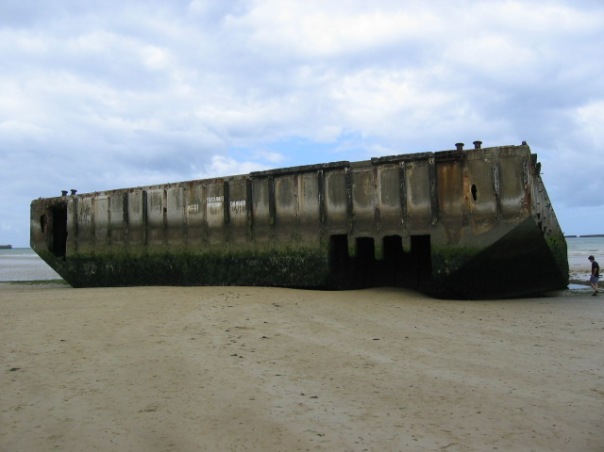 An incredible feat of engineering had both harbours almost fully functional when they were hit by a storm on 19th June. The Mulberry Harbours had been designed for summer weather not the worst storm to hit the Normandy coast for 40 years, and the harbour at Omaha beach was so badly damaged that it was beyond repair. This could have been a disaster for the Allied forces, but although the second Mulberry suffered some damage it survived the storm and continued to land supplies in support of the invasion. Although it had been designed to last for just ninety days Port Winston was in continuous use for ten months following D Day and in that time landed over half a million vehicles, two and a half million men and four million tons of supplies.

When the invasion had moved eastward and liberated ports from the Nazis the harbour was no longer useful and was abandoned. If you visit Arromanches today you can see the remains of the Mulberry Harbour from the beaches. 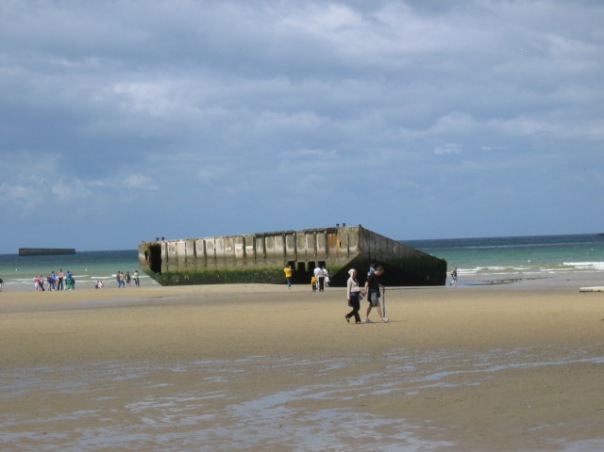 The scale and sheer audacity of the Mulberries took the Germans completely by surprise. At the Nurembeurg trials after the war Albert Speer, Reich Minister of Armaments and War Production for Nazi Germany, gave a German perspective on the Mulberry Harbours:

“To construct our defences we had in two years used some 13 million cubic metres of concrete and 1½ million tons of steel. A fortnight after the Normandy Landings, this costly effort was brought to nothing because of an idea of simple genius. As we now know, the invasion force brought their own harbours, and built, at Arromanches and Omaha, on unprotected coast, the necessary landing ramps.”

When we remember the troops who fought and died on the beaches of Normandy we should not forget those who designed and built the Mulberry Harbours which were so instrumental in making D Day and the invasion of Europe such a success.

2 thoughts on “The fruits that won the war – Mulberry Harbours”