Queen Elizabeth II was a teenager during the Second World War and life for her was, in many ways, not dissimilar to that of other teenagers. Her father, King George, insisted that the royal family should not have any special treatment, they had the same rations as everyone else and even applied this to visitors to Buckingham Palace – including Eleanor Roosevelt, the wife of the American President!

Princess Elizabeth was 14 years old when Britain declared war on Germany and her safety as heir to the throne was of great concern to many people. Viscount Hailsham, a well respected former Conservative politician, spoke for many when he suggested that Elizabeth and her sister, Princess Margaret, should be evacuated to Canada for the duration of the war. The Queen, however, was adamant that this should not happen and told the Viscount that ‘The children won’t go without me, I won’t leave without the King, and the King will never leave.’ This was a very public statement that the royal family intended to stay in the United Kingdom but, in private, King George VI made plans for the two princesses to be evacuated if, and only if, a German army landed in England and there was a real threat that the royal family might be taken prisoner. (see article on George VI) Although his children would be taken abroad to safety King George intended to stay after any invasion to help with the resistance.  This plan was kept secret in order to keep up the morale of the British people and, thankfully, there was never any need to put it into action. During the first winter of the war Elizabeth and Margaret stayed at the Balmoral estate in Scotland, moving to Sandringham after Christmas 1939 and then back to Windsor where they lived for the remainder of the war. Each year they ‘did their bit’ by putting on a pantomime to raise money for the Queen’s wool fund to buy wool for the manufacture of military clothing.

The relentless bombing of British cities in the Blitz meant that many children were evacuated to the countryside and, in October 1940, Princess Elizabeth broadcast a radio message to them on the popular Children’s Hour programme. Her message offered thanks to the host families and support for the children who were living with strangers in a strange environment. The core of her message was that the children should stay strong, and face the war with courage, determination, and hope. She said that ‘We are trying to do all we can to help our gallant sailors, soldiers and airmen, and we are trying, too, to bear our share of the danger and sadness of war. We know, every one of us, that in the end all will be well.  When peace comes,” she said, “remember, it will be for us, the children of today, to make the world of tomorrow a better and happier place.’ (Princess Elizabeth’s broadcast)

Although Elizabeth felt an affinity for the children of the United Kingdom her position as heir to the throne meant that she would have a unique role and responsibilities. In 1941, at the age of 15, she was appointed Colonel-In-Chief of the Grenadier Guards, and her first public appearance alone was a visit to inspect the regiment when she was 16. Yet she could sympathise with those who had lost family members in the war for she, too, lost her beloved uncle Prince George, Duke of Kent, who was the first member of the royal family to be killed on active service for 500 years. Mystery still surrounds the circumstances of his death; Prince George was an RAF pilot and set out alone on a secret mission, when his body was recovered from the hillside in Caithness where his plane had crashed he was found with a bag containing a large number of 100 Krona banknotes handcuffed to his wrist.

In 1944 Parliament changed the law to allow Princess Elizabeth to act as one of the five Counsellors of State who were senior members of the royal family who would effectively take over the role of the monarch should the King be incapacitated or out of the country. She performed this role when George VI went to Europe to visit the troops after the D Day landings. (see article on George VI)

When she was 18 Elizabeth wanted to join the ATS but this was opposed by the King; it was not until February 1945 that he finally agreed and the princess signed up as an honorary Second Subaltern with the service number 230873. After five months of training as a mechanic and military truck driver in Camberley the future queen was promoted to the rank of honorary Junior Commander (the equivalent of a Captain in the army). Throughout her training Elizabeth worked for seven hours a day before returning to Windsor Castle at night; she appears to have taken her duties very seriously and, although some people were excited by her presence, it is reported that she was hard working and humble during the time she served in the ATS. The Queen is the only female member of the British royal family to have served in the armed forces. The ATS (Auxiliary Territorial Service) was the women’s branch of the army during the Second World War, but although the women had full military status they were only paid two-thirds of the wage of a man of the same rank even when serving overseas. Women in the ATS served in a number of roles from the mundane clerical to the most dangerous, including manning anti-aircraft guns (Mary, the daughter of Winston Churchill, served on anti-aircraft batteries for the duration of the war). 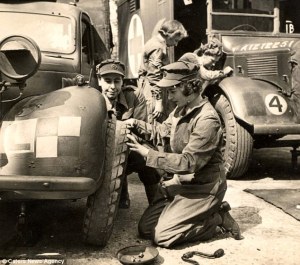 Watch a Pathe News report of the King, Queen and Princess Margaret visiting Princess Elizabeth on a driving course at a training centre.

There were great celebrations when the Allies finally achieved Victory in Europe. On VE Day, 8th May 1945, the royal family made numerous appearances on the balcony of Buckingham Palace to the cheers of massive crowds. The princesses Elizabeth and Margaret looked down to the joyful celebrations and wanted to join in; surprisingly, the King gave his permission for the sisters to go into the streets incognito. So the heir to the throne strolled down Whitehall arm in arm with her sister, possibly the only time that she has been able to be just one of the crowd, as she later described it ‘We asked my parents if we could go out and see for ourselves. I remember we were terrified of being recognised … I remember lines of unknown people linking arms and walking down Whitehall, all of us just swept along on a tide of happiness and relief.’

Although the Second World War ended in 1945 rationing was only phased out gradually and did not finally end until 1954. The royal family continued to follow the restrictions and Princess Elizabeth even saved up ration coupons to buy the material for her wedding dress in 1947.

Queen Elizabeth II is the only remaining living head of state in the world who served during the Second World War and remains the only female member of the royal family to have served in the armed forces.