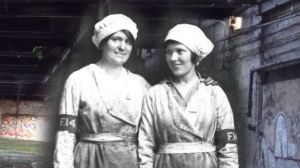 This year sees 75 years since the end of the Second World War and no doubt there will be many events to commemorate that fact. Often memorials focus on the soldiers who fought and died for their country, but while the men were away at the front it fell to the women to work in the factories and fields on the Home Front of England. Approximately 950,000 women worked in the munitions factories alone, producing the shells and bullets used by their fathers, husbands, and sons at the front. One of the largest of these factories was at Rotherwas, Herefordshire, which employed up to 4,000 women at its height and produced around 70,000 shells a week. Many of the women who worked there were as young as 16 but others were considerably older, some were even the daughters of women who had worked in the munitions factories during the First World War.

The job was relatively well-paid for a woman at that time, but the hours were long with the women often working eleven- or twelve-hour shifts to keep the factories running day and night. During these mammoth shifts the workers were only allowed a couple of short breaks, and this went on day after day, seven days a week, with just the occasional leave day granted every now and then. As well as long hours the job was also dangerous. There was the ever-present threat of an explosion, and the women suffered physically due to the effects of the chemicals which they were handling constantly. The TNT reacted with melanin in the body causing the women’s skin and hair to turn yellow, which earned them the nickname ‘Canary Girls’. The effects of the chemicals were more than skin deep however, as any of the women who became pregnant whilst working there gave birth to yellow ‘Canary Babies’. The colour gradually faded away but the women must have been afraid that there might be long term effects on their new born babies.

Little, if any, training was given to the women who worked in the munition’s factories – they would simply turn up for their first shift and within minutes were filling shells with TNT. It was delicate work as they collected the hot explosives from a huge mixer (something like a cement mixer), filled the shells and inserted the tube to take the detonator which they then had to tap in very carefully in order not to cause an explosion. In other parts of the factory women had to clean the shells ready to be filled, they did this by rubbing a pad on something like an emery board before inserting the pad into the top part of the shell, this was followed by another disc, tiny screwdrivers and screws were used to finish the fuse and  put it in place. It was tedious, and dangerous, work. As well as the constant fear of explosions the workers were also at serious risk from accidents with dangerous machinery. It was not uncommon for women to lose fingers and hands, to suffer burns and blindness. In February 1944 19 workers, mainly women, were in a shed in the Royal Ordnance Factory in Kirby, Lancashire when one of the anti-tank mine fuses they were working with exploded, setting off a chain reaction amongst the other fuses. The girl who was working on that tray was killed outright, her body blown to pieces, other workers were injured, one fatally, and the factory badly damaged. There were also explosions at factories in Barnbow near Leeds, Chilwell in Nottinghamshire and Ashton-under-Lyne.

To reduce the risk of explosions the women had to pass through the `Shifting House` twice daily – on the way in to work and on the way out again. This was a long building divided down the centre by a red barrier, one side being the dirty side and the other side the clean. Such were the fears that a rogue spark caused by static might lead to an explosion that the women were banned from wearing nylon and silk. On arriving to start their shift their outdoor clothing, jewellery and hairpins were removed along with any matches and metallic items in their pockets (although jewellery was taken off women could continue to wear their wedding rings as long as they were taped up). The women would then be checked for any metallic fasters on their under garments (only lace up corsets could be worn, no bras with metal clasps) before they could pass to the clean side and put on their regulation cream coloured gowns buttoned right up to their neck and tight around their wrists, and their regulation issue hats – a tightly fitted mop cap with as much hair tucked away under it as possible. Of course, at the end of a shift or to leave the danger buildings area for any reason the complete reversal had to be undertaken so to save time the women were not allowed out on their breaks but had to use their own canteen inside the Danger Building where everything was stained the same ubiquitous yellow as the girls.

If the dangers inherent in the job weren’t enough there was always the threat of bombing by the Germans. The factory at Rotherwas was bombed at dawn on 27th July 1942 when the Luftwaffe dropped two 250kg bombs on the 300 acre site. The women were coming to the end of their shift and ran out when the sirens sounded. To their dismay they found that the air-raid shelters were locked so they sought cover wherever they could. The attacking plane flew in so low that the women could clearly see the black cross on its wings and the bombs falling from beneath it. There was a direct hit which ignited some of the munitions on the ground, the result was absolute carnage – from one unit of two hundred and thirty women only two survived.

It is a credit to the Canary Girls that despite all that they endured they rarely complained about the terrible working conditions, they were proud to know that they were doing their bit for the war effort and saw it as a patriotic duty. These women were putting their lives on the line every bit as much as the men who had gone to war, yet the numbers of women who were killed or seriously injured whilst working in the munitions factories is not known, and few people know of the work that they did and its lasting effects on their lives. Although the Canary Girls lost their yellow colouring when they left the factories the women often suffered with illnesses in later life ranging from throat problems to dermatitis, the most debilitating was a liver disease called toxic jaundice caused by prolonged exposure to TNT, which often proved fatal. As we celebrate 75 years since the end of the war this year, I hope we take time to remember all those who served, including the Canary Girls of the munition’s factories.