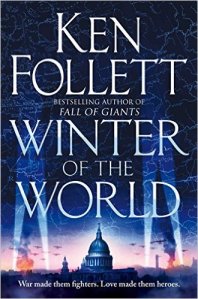 ‘Winter Of The World’ is the second part of Ken Follett’s trilogy about the twentieth century. It is an ambitious novel, taking readers from 1933 through the Second World War to 1949. The plotting is complex with characters in the US, England, Germany and Russia who experience some of the key points of this period of history – the rise of Hitler, the Nazi euthanasia programme, the war in Europe, Pearl Harbour, war in the Pacific, the development of the atom bomb, the aftermath of war in Germany – the list could go on and on. The raft of characters and wide ranging storylines does mean that some important parts of this period of history are missed or skimmed over, but that is perfectly understandable.

The historical information in this book creates a believable backdrop for the lives and loves of the fictional characters, and is testament to the in depth research which Mr Follett must have carried out. The characters are quite well rounded and believable of themselves, although the fact that they are almost all upper class or wealthy does give a certain bias to the book; even the family which comes from a Welsh mining village is involved in politics and has MP’s amongst them. I realise that Mr Follett does this to move the plot on, but I would have preferred to read about a few more ‘ordinary’ people.

Mr Follett has a way with words which brings scenes to life; he also writes in a way which keeps the story moving at a good pace and so draws the reader into his world. The first novel in the series, ‘Fall of Giants’, which deals with the first thirty years of the last century, should be read before this novel to give an understanding of who the main characters are and where they came from, but as that is an equally well researched and well written novel reading it will be no hardship!

‘Winter Of The World’ is a novel which will be enjoyed by people with an interest in twentieth century history, and also fans of Mr Follett’s previous books. I heartily recommend it.

Winter Of The World can be found on Amazon

More of my book reviews can be found here 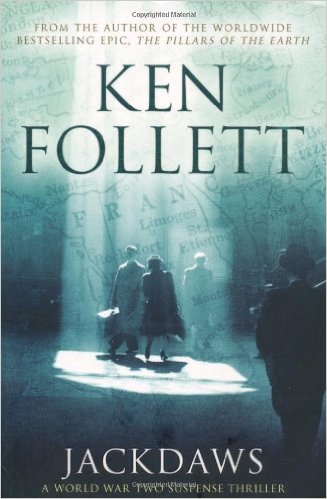 Two weeks before D-Day, the French Resistance attacks a chateau containing a telephone exchange vital to German communications – but the building is heavily guarded and the attack fails disastrously.

Flick Clairet, a young British secret agent, proposes a daring new plan: she will parachute into France with an all-woman team known as the ‘Jackdaws’ and they will penetrate the chateau in disguise. But, unknown to Flick, Rommel has assigned a brilliant, ruthless intelligence colonel, Dieter Franck, to crush the Resistance. And Dieter is on Flick’s trail…

Mr Follett is an historical novelist whose writings have ranged across the centuries; with ‘Jackdaws’ he returns to World War II in the days leading up to D Day. After an unsuccessful attempt to destroy an important communications exchange female SOE operative, Flick Clairet, heads an all-female operation to enter the complex in disguise and cause enough damage to disrupt German communications during the Allied invasion.

The plot of ‘Jackdaws’ is realistic; many women served in the SOE during the war, and some of them paid the ultimate sacrifice. Details of how agents were trained, how they reached their destinations in France, and the types of attacks they carried out alongside the French Resistance are accurate. Through this we are able to see the fear and horror facing those who worked behind enemy lines, yet also their courage and resourcefulness, and in this respect I can highly recommend this novel.

On the other hand, I did find some aspects of ‘Jackdaws’ a little too far-fetched. It would have been possible to put together an all-female group, but no agents would have been sent out with the limited training that the characters in this novel received. Also, some of the characters were incredibly blasé about the dangers facing them, behaving almost as though they were on holiday rather than on a secret mission behind enemy lines. Having said that, this is historical fiction and so one can suspend belief a little in exchange for a good story. And ‘Jackdaws’ is that. The plotting is clear, the action almost constant, the suspense engaging.

Alongside the story of Flick and her group we also have the story of Dieter Franck, a German Intelligence officer whose character is full of contradictions – willing to do whatever is necessary to achieve his aims, yet feeling the guilt at what those actions entail; a loving husband, yet a man who also loves his mistress; a man who upholds the German ideal yet has feelings for a Jew. With Franck, and the other main characters in this novel, Mr Follett explores human psychology showing us the complexity of human relationships and how our feelings for others can colour our actions.

All in all, ‘Jackdaws’ is a good war-time thriller. Anyone who enjoys a fast-paced story set during the Second World War will enjoy this novel.

Jackdaws can be found on Amazon

You can find more of my Book Reviews here