When we think of the early months of the Second World War we often focus on the setbacks suffered by the Allies in Europe including the disastrous fall of France and the heroic rescue of the British Expeditionary Force from Dunkirk. We also think of the losses we suffered in North Africa against Rommel and his Afrika Korps; but what is often forgotten is that our first adversary in Africa was not the Germans but the Italians and, for a time, things there were very different.

Both Britain and Italy were intent on protecting their colonies in Africa. There were skirmished between the two sides but the Italian commander, Graziani, was doubtful that his largely un-mechanized force would be capable of defeating the smaller but motorised forces of the British. The first major movement of troops began on 13th September 1940 when the Italian 10th Army advanced into Egypt and the British retreated before them to shorten their long supply lines from Alexandria, finally setting up defensive positions east of Mersa Matruh. The Italians had advanced 60 miles in 3 days before facing similar supply problems and halting at Maktila where they set up 5 fortified camps whilst they waited for supplies and reinforcements (one reason that supplies were running short for the Italians was that vital supplies had been diverted from North Africa for the invasion of Yugoslavia). In their initial push into Egypt the Italians lost almost 3,000 men with another 700 taken prisoner as well as 150 vehicles being destroyed, resources which the Italians could ill afford to lose so reconsolidation was vital if they were to defeat the British.

General Wavell was in command of the British troops and ordered a limited operation to push the Italians back. This push was planned to last for five days although he insisted that Lieutenant-General Maitland Wilson should be ready to exploit any advantage that Operation Compass might give saying, ‘I do not entertain extravagant hopes of this operation but I do wish to make certain that if a big opportunity occurs we are prepared morally, mentally and administratively to use it to the fullest.’ 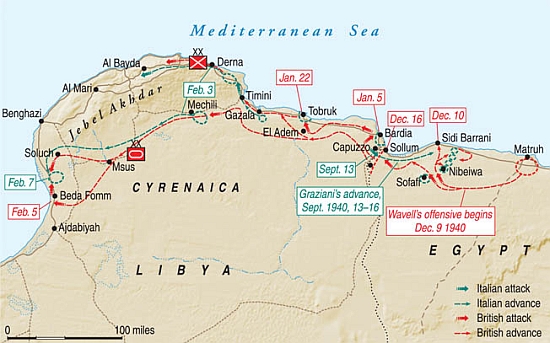 Wavell’s plan was to take Sidi Barrani on the Mediterranean coast, but the Italians had not been idle during their 3 months setting up camps – they had an estimated 75,000 men in the area with around 120 tanks and 200 big guns. In opposition the British had around 25,000 men and 275 light tanks. The plan was for part of the British troops to take advantage of a 20 mile wide gap in the Italian ring of fortified camps and move west where they would then be able to turn north and south to outflank the enemy. The attacking troops rehearsed these moves on 25th – 26th November 1940 although they didn’t know that the ‘training grounds’ marked out in the desert were exact replicas of their targets at Nibeiwa and Tummar. Orders came for a second exercise and it wasn’t until the troops arrived at the proposed site that they found this was no exercise but the jumping off point for a major Operation. On the night of 7th December the Western Desert Force advanced 70 miles west to their designated start line whilst the RAF attacked Italian airfields and dummy tanks were set up at strategic points to confuse the enemy.

The attack proper began at 5am on 9th December with British artillery firing on the Italian camp at Nibeiwa. By 8.30am the camp had fallen with over 800 Italian and Libyan soldiers dead, 1,300 wounded and 2,000 captured as well as large quantities of supplies being taken by the British forces who only had 56 casualties. With spirits high British troops moved on from Nibeiwa towards the camps at East and West Tummar. A huge sandstorm during the day slowed the British advance but as the weather cleared Indian and New Zealand forces pushed on with the attack just before 2pm. By 4pm most of the camp at Tummar West was in British hands with East Tummar falling by dark. As the Allies continued to push west enemy positions continued to fall like dominoes. The 2nd Libyan Division lost 26 officers and 1,327 men killed, 32 officers and 804 men wounded and all survivors being taken prisoner.

At Maktila the enemy were forced into sand dunes where they were overrun by British Cruiser tanks. The remaining Italians regrouped at Sidi Barrani where the British attacked in the late afternoon of 10th with the position falling by nightfall. Wavell’s forces continued to push west causing mass surrenders of the defending troops, so much so that the number of prisoners began to slow the advance of the British who were totally unprepared for such high numbers.

The shocked Italian army was in full retreat with the British harrying them every step of the way. By the time the Italians had been pushed out of Egypt on 15th December (less than a week into Operation Compass) 38,300 of their men had been taken prisoner and huge amounts of equipment had been abandoned including 237 pieces of artillery and 73 tanks while the British losses consisted of 133 killed, 387 wounded and 8 missing. The British halted for a time to bring up supplies and await Australian reinforcements before attacking the enemy at Bardia (on the Egyptian coast about half way between Sid Barrini and Tobruk) which was garrisoned by 45,000 men and over 400 guns and tanks; Bardia was also surrounded by 18 miles of double barbed wire fencing with a four foot anti-tank ditch, minefields and machine gun positions. Whilst forces were amassing the British continued to attack in other sectors – Sidi Omar was taken on 16th December in a battle which lasted just 10 minutes leaving 50 Italians dead and 900 taken prisoner!

With new supplies and a new year the British resumed the attack again on 3rd January 1941 after a night of heavy bombing and bombardment of Bardia. The 6th Australian Division had air and naval support as they began the attack, blowing gaps in the barbed wire and filling in the anti-tank ditches by hand. Once they had breached the outer defences other Australian forces pushed through the gap, broke through the secondary defences and cut the city in two. Bardia finally fell after 3 days of fighting. The Italian forces were in such disarray that the commander of one British tank found himself in charge of 1,500 Italian prisoners! In all more than 25,000 Italians were captured whilst the Australians lost 130 killed and 326 wounded. The disheartened Italians regrouped at Tobruk with its vital harbour and garrison of over 25,000 within the two rings of defences (the inner 19 miles long, the outer 30 miles). The British halted their push to bring up supplies and carry out maintenance on the tanks which had covered too many miles without any repair or replacement of tracks.

The attack on Tobruk began at 5.40am on 21st January 1941 with the British advancing an impressive 1 mile during the first hour. The Italians put up a fierce fight but by early evening the British had taken half of the port with the help of air support from the RAF. Sensing inevitable defeat the Italians began to destroy the port before finally surrendering the following morning. Within 36 hours of the initial attack the British had taken 27,000 prisoners, 230 guns and 200 vehicles with the loss of only 400 men, 355 of whom were Australians. Although they had destroyed many stores the Italians had not had enough time to destroy all of the port facilities and the British were soon able to use it for their own re-supply. Two captured water distilleries also helped to reduce the problems of supply for the attacking army which continued to push steadily westward.

The Italian reserve forces were not ready for battle but feared that they might be surrounded by the British and so began a counter-attack on 23rd January. Their push was initially successful before they were caught against the skyline on the top of a ridge and their tanks destroyed. The Italians were now desperate and slowed the British advance with mines, booby-traps and ambushes, but the British still took Derna on 29th January before pursuing the enemy along the coast road as well as moving through the mountains in order to cut of their retreat from behind. The encircling forces arrived just 30 minutes before the fleeing Italians on the 5th February. The Italians attacked the next day and fought for over 24 hours, but with more British troops arriving to surround them they surrendered on 7th February with 25,000 taken prisoner and the loss of 107 tanks and 93 guns.

This surrender of the fleeing Italians marked the end of Operation Compass, a holding exercise originally planned to last for just five days but in which two Divisions (one new to the dessert and one short on tanks) decimated an army more than 10 times its size. Wavell was able to garrison Tobruk with the aim of continuing to push the Italians westwards and out of North Africa for good. Operation Compass was a massive victory for the British and it looked as though the whole of North Africa would soon be in their hands.

The British had yet to hear of Erwin Rommel and his Afrika Korps.