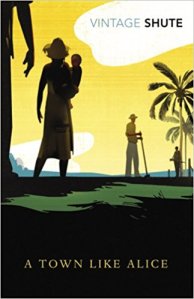 Jean Paget is just twenty years old and working in Malaya when the Japanese invasion begins. When she is captured she joins a group of other European women and children whom the Japanese force to march for miles through the jungle – an experience that leads to the deaths of many. Due to her courageous spirit and ability to speak Malay, Jean takes on the role of leader of the sorry gaggle of prisoners and many end up owing their lives to her indomitable spirit. While on the march, the group run into some Australian prisoners, one of whom, Joe Harman, helps them steal some food, and is horrifically punished by the Japanese as a result.

‘A Town Like Alice’ is a classic which loses none of its appeal with the passage of time. The description of life for the English women and children who are unwanted prisoners of the Japanese, forced to march for months on end by Japanese officers who refuse to take responsibility for them, is harrowing. You would be forgiven for saying that something as inhumane as that could never have happened – but it did, though in Sumatra not Malaya. Mr Shute met with one of those women after the war, and this novel is a tribute to her strength and endurance and that of those who were held with her, and those who died during their long captivity.

You may also be forgiven for thinking that the story must be depressing, it is not. This is a novel of hope not despair. Mr Shute uses his characters to show us the good in humanity, the willingness to help others despite personal cost – Joe, the Australian soldier, who stole to feed the women, with tragic consequences; Jean’s struggles as she tries to cope with the ‘normality’ of England after the war, unable to begin life again because of a burden of guilt she carries from her time as a prisoner; the kindness and support show to Jean by her solicitor, Noel. Mr Shute skilfully weaves a believable plotline which takes Jean back to Malaya and on to Australia, searching for answers and for a purpose in life. Can she re-build her life in a new country in ‘a town like Alice (Springs)’ which Joe told her so much about?

This is a well-researched and well written novel in which Mr Shute immerses the reader in life in three very different locations – war-torn Malaya, bombed out London and the developing outback – with the effortlessness of a master wordsmith. This is a story of ordinary people with an extraordinary tale to tell; a timeless tale of love and loss, of romance and redemption. ‘A Town Like Alice’ is one of the books I’ve read more than once and always enjoy coming back to. If you have never read this modern classic you really must give it a go.

‘A Town Like Alice’ can be purchased from Amazon

Yet another 5* review for Heronfield.
However, in my mind, the number of stars is far outweighed by the very kind comment about my writing style.  To be likened to such a great author as Nevil Shute is truly an honour.  Thank you lizziep
5.0 out of 5 stars authentic, 1 Nov 2013 By lizziep
This review is from Amazon
Having read a number of books set in the war, I started to read this book with a certain amount of trepidation – too often authors are not able to convey the real sense of what it must have been like to be in that situation. “Heronfield” was a most ‘pleasant’ surprise (I use the word ‘pleasant’ in quotation marks as I have to admit that some of the descriptions were unpleasantly graphic – but even this added to the feeling of reality and authenticity) in that it was obvious that the author had not only spent a great deal of time researching her subject, but had complete immersed herself in it. From the descriptions of pre-war life in the big house, to the description of life in an interment camp, the whole novel had a feeling of authenticity and was able to indicate to me what it must have been like to have been alive during that whole dreadful period – not just a serving member of the forces, but also the civilians living (or existing) back at home and how they coped. Ms Balchin is a relatively new author, however, her style of writing reminds me very much of the style of Nevil Shute – an author I have gone back to time after time. I suspect that Ms Balchin will have a similar effect.